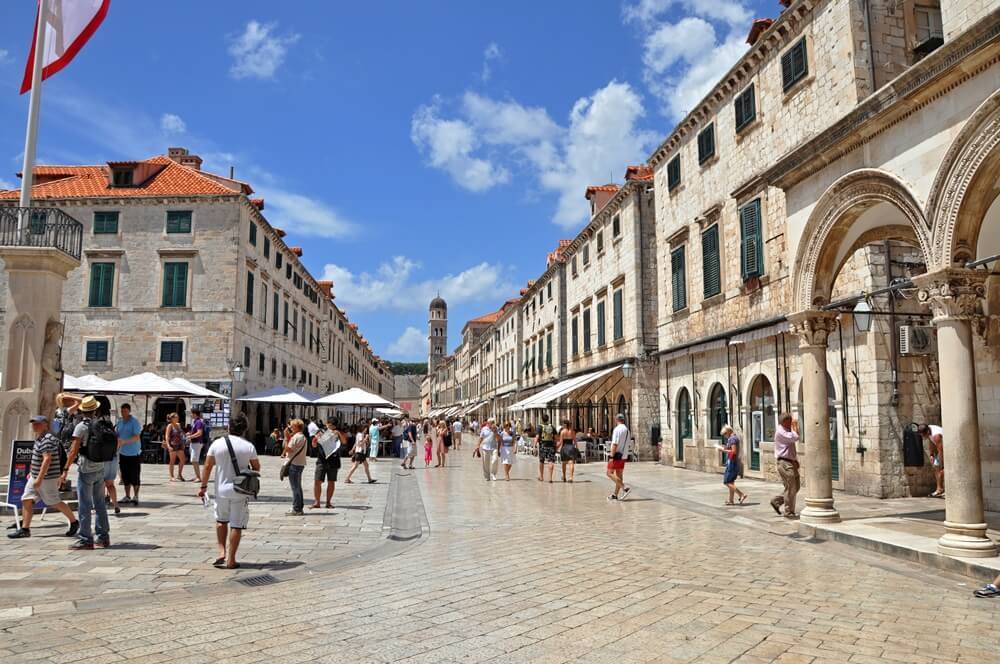 On this city tour you will be able to see and discover all the highlights of Dubrovnik’s Old Town. Your guide will reveal to you fascinating stories from the City’s 1500 year long history; such as abolishing slavery trade in 1416., some 400 years before the British Empire. We’ll take you along the streets of Dubrovnik and show you the backstreets and hidden places where the history of this wonderful city was forged.

Starting at Big Onofrio’s fountain, one of the city’s landmarks and a place where people for centuries found refreshment; our route will lead us along the picturesque residential side-streets to the old port. During the walk through vibrant residential streets, key elements of street planning and medieval house construction requirements will be explained.

On the main square, some of the masterpieces of Dubrovnik’s secular and religious architecture such as harmonious Sponza Palace, sublime Baroque church of St. Blasius and elegant Orlando column which soars in the middle of the square, will be seen and explained.

As we stroll by the Rector’s Palace and the Cathedral our guide will treat you with legends and stories about the City’s unique government and fascinating diplomacy, which was lightly admired and even today is a subjects of admiration and research on international universities.

Finally we’ll reach the Old Port, where your eyes will be captured by the sights of mighty fortresses of St. John and Revelin. You’ll learn about sea trade and shipbuilding activities that have been fundamental to City’s success during the centuries.

While in the Old Port our guide will throw light upon the remarkable Quarantine and its importance to merchant city such as Dubrovnik.

When all is said and done, Dubrovnik City tour is an easy and inexpensive way to get to know Dubrovnik’s Old City and its most interesting sites.

Villa Molunat is a brand new, seaside, family owned luxuriously equiped villa, nested in the picturesque bay of Molunat, perfectly positioned halfway between city of Dubrovnik and the bay of Kotor (Montenegro), offering a tranquil setting for a vacation you deserve.

You can find out more about which cookies we are using or switch them off in settings.

This website uses cookies so that we can provide you with the best user experience possible. Cookie information is stored in your browser and performs functions such as recognising you when you return to our website and helping our team to understand which sections of the website you find most interesting and useful.

Strictly Necessary Cookie should be enabled at all times so that we can save your preferences for cookie settings.

If you disable this cookie, we will not be able to save your preferences. This means that every time you visit this website you will need to enable or disable cookies again.

This website uses Google Analytics to track site usage. We do not collect any personal data. All data we receive is aggregated.

Please enable Strictly Necessary Cookies first so that we can save your preferences!